Data synchronization between different systems is nowadays widespread and a key productivity booster in our daily lives. Do you even remember the work and hassle you used to have when trying to keep files synchronized between different computers before automatic file synchronization services (like Dropbox or Google Drive) appeared? One of our main goals at PTCRIS (1) is precisely to develop similar synchronization mechanisms for research information, in order to reduce the burden of research output management for researchers and organizations that need to interact with several platforms and systems, for example, in order to automatically synchronize information between a local CRIS and a CV management system or an open-access repository.

With this goal in mind, our PTCRISync team has developed a synchronization framework that relies on ORCID as a central hub for information exchange between the various systems. The framework is already being used in two Portuguese systems, Ciência Vitae, the new national CV platform, and Ciência-IUL, a local CRIS from one of the main Portuguese universities. Figures 1 and 2 depict interface screenshots of the implementation of the framework in the former. 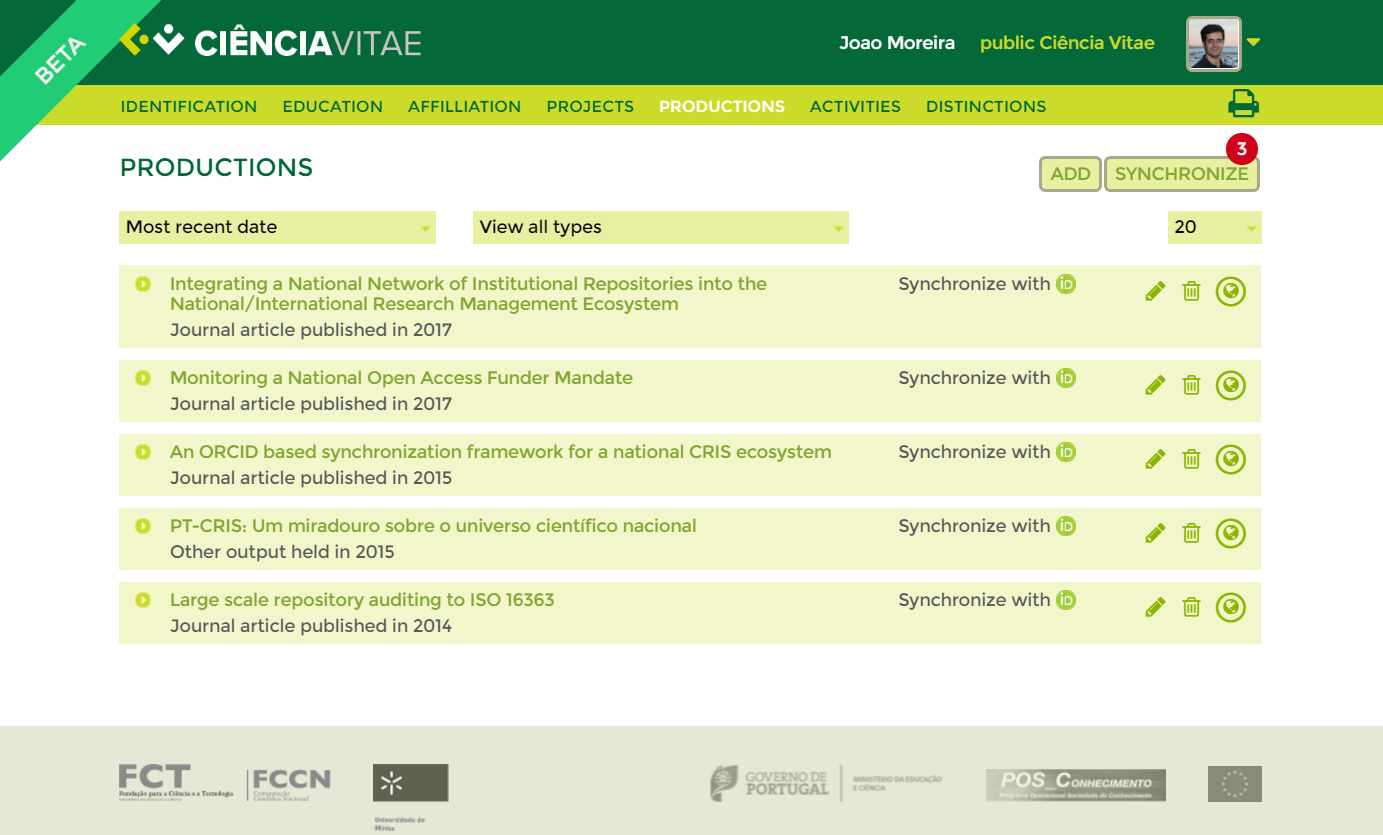 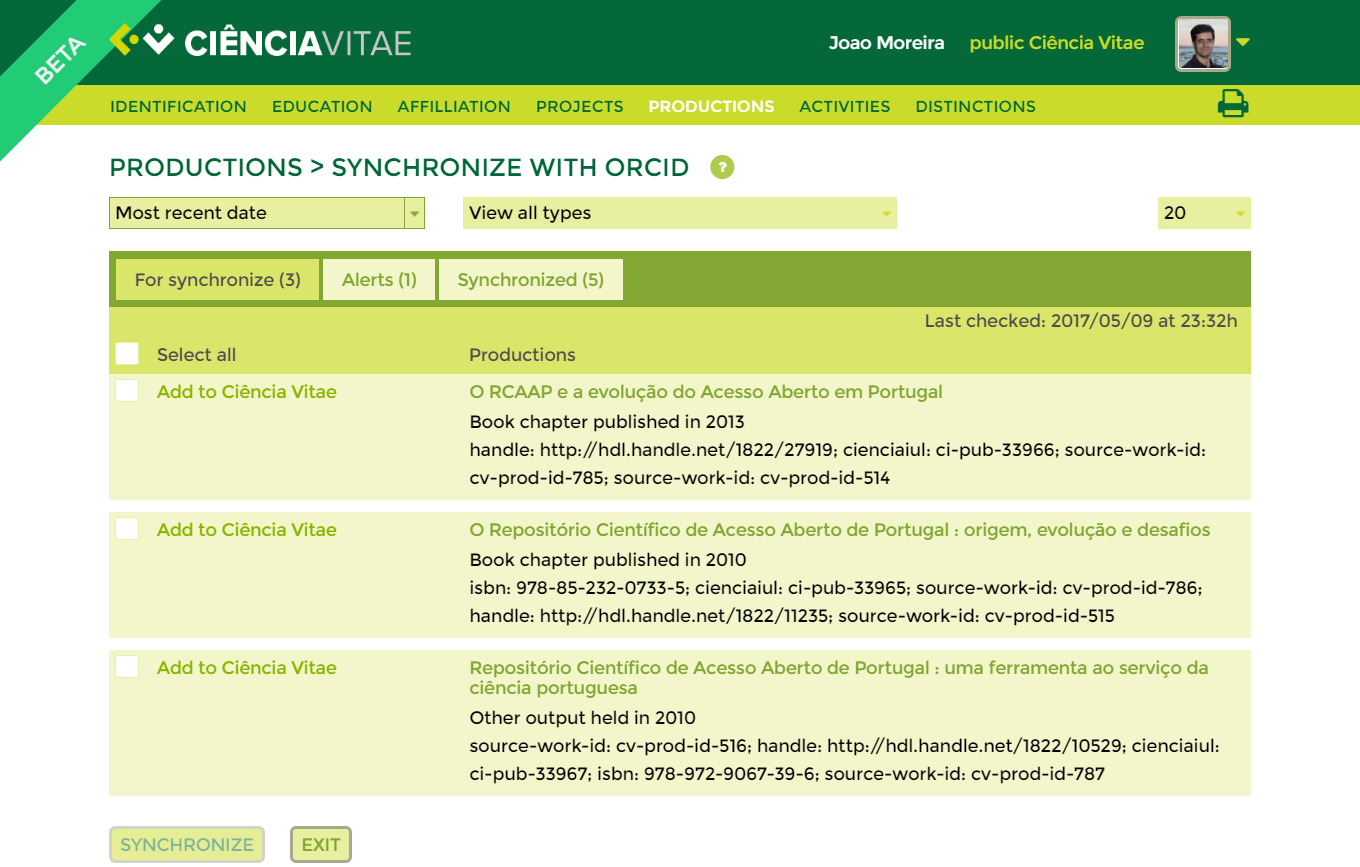 ORCID was a natural choice for us for several reasons:

And, since the time spent by researchers inputting research outputs is far from negligible, we have developed a simple simulator that can be used to estimate the costs saved by having this framework synchronize information between a given number of systems. The simulator is pre-loaded with data from the Portuguese scenario, but you can easily change the base values to your own case.

Key to this framework is a library – PTCRISync – that eases the implementation of a fully bidirectional and incremental synchronization mechanism with ORCID. Concerning importing works from ORCID, while the ORCID API provides a method to get all works from a given user record, the PTCRISync library provides a method that allows you to specify which works you already have in your local system, and discovers new works and new external identifiers for works you already have, thus allowing you to continuously enrich the metadata of your records. Similarly, for exporting, while the ORCID API allows you to add, update, or delete individual records, PTCRISync allows you to just specify the full set works you want to publish in an ORCID record, and the library will automatically detect which works should be added, updated, or deleted. In the near future we will add new functionalities to this library, namely the ability to also synchronize funding and other CV elements.

The library is implemented in Java and is freely available at GitHub. If you are an ORCID member organization thinking about implementing such bidirectional synchronization with ORCID,  we encourage you to download and try it out. We also provide a Wiki with extensive documentation, including a recommended interface (see examples in the figures above) for deploying this synchronization feature, and guidelines for binding the various interface elements to the library methods. This interface was designed by user experience experts and thoroughly validated with end users. To obtain more information or provide feedback please contact the PTCRISync team at ptcrisync@googlegroups.com.

(1) PTCRIS (Portuguese Current Research Information System) is a program, officially initiated in May 2014 by FCCN (Fundação para a Computação Científica Nacional), the FCT (Fundação para a Ciência e Tecnologia – the Portuguese Foundation for Science and Technology) unit responsible for planning, management and operation of the national research and education network. PTCRIS aims to ensure the creation and sustained development of a national integrated information ecosystem, to support research management according to the best international standards and practices.